Posted on June 1, 2020 By Nathan Neighbors in Books

This first day of summer vacation seemed like a good opportunity to go back to a book I once read over twenty years ago.  What better book to read as my first summer reading, than Man’s Search for Meaning by Victor Frankl.  With over 15 million copies in print and listed as one of the most influential books of all time, it seemed like a great place to start a summer book list.  Though our world would appear to be falling apart in front of our eyes, these words from concentration camp survivor, Fankl reminds me that despite the worst circumstances, there is hope.

Here are some of my favorite quotes from today’s reading of this great book:

“…there are two races of men in this world, but only these two – the ‘race’ of the decent man and the ‘race’ of the indecent man.  Both are found everywhere; they penetrate into all groups of society.  No groups consist entirely of decent or indecent people.” (pg 86)

“…man’s main concern is not to gain pleasure or to avoid pain but rather to see a meaning in his life.  That is why man is even ready to suffer, on the condition, to be sure, that his suffering has a meaning.” (pg 113)

“Freedom, however, is not the last word.  Freedom is only part of the story and half of the truth…freedom is in danger of degenerating into mere arbitrariness unless it is lived in terms of responsibleness.  That is why I recommend that the Statue of Liberty on the East Coast be supplemented by a Statue of Responsibility on the West Coast.” (pg 132)

“Man has both potentialities within himself; which one is actualized depends on decisions but not on conditions…after all, man is that being who invented the gas chambers of Auschwitz; however he is also that being who entered those gas chambers upright, with the Lord’s Prayer or the Schema Yisrael on his lips.” (pg 134)

During the four years that Victor Frankl suffered unimaginable cruelty and persecution in four different Nazi concentration camps, he learned what it meant to suffer well and live life on purpose despite his circumstances.  There is much that we as Christ followers can learn from the experiences of Frankl.

What are you living for?  What is your purpose?  Is it in the things of this world that are temporary – or do we have a greater purpose for our lives?  Are we living for Christ and loving others well?  During these days of pandemic, division and unrest – there is much to learn in this book from one who has experienced far more suffering than I probably ever will.  May we learn from those who have gone before us so we don’t repeat the mistakes of our past.

Today, didn’t happen “the way it’s always been,” but in some way it was more special than ever.  Today was Graduate Recognition for the Class of 2020 students at Ebenezer Baptist Church.  This was our 19th year celebrating graduates at the churches where Ashley and I serve.  Never have I been unable to shake a hand or give a hug to a graduating senior before today.  This COVID-19 has changed much in this season for us all.

Though we were unable to shake the hands of our graduates or host a graduation luncheon, there were many new things that helped make this graduation memorable.  Thank you to our church volunteers for making and delivering yard signs last week.  Thank you to our volunteers for making personalized face masks for all of our graduates.  Thank you to everyone who joined us in person or online to watch our graduates be recognized.  Though this was the most different recognition I’ve experienced in 19 years, it will now be the one I will never forget.  Sometimes change is a really good thing.  My prayer is that these students never forget this day and the weird things they had to do (like wearing face masks).  Maybe when they look back in ten or twenty years, they will remember it being a moment that made a huge impact in their faith.  Maybe they will look back and remember – that was the day that churches across America struggled to gather publicly.  …But my Ebenezer Church family did their best to gather – in person – in a building – in a face mask  …all to let me know I am loved by JESUS.  Congratulation Class of 2020!  We love you and your Savior loves you more than you’ll ever fully comprehend.

Florence 1 – From One to Everyone

Posted on May 14, 2020 By Nathan Neighbors in Education + Family + Leadership + Parenting + Technology

Florence One Schools historically have had a less than stellar reputation for quality education, facilities and leadership.  Don’t get me wrong, I love this town – it’s my home.  Ashley and I are both products of Florence Schools.  I went to Greenwood Elementary, Southside Middle and South Florence High School ’94.  But, Florence has a long history of division and leadership struggles.  Still…it’s a good community and is filled with great teachers who love teaching students.  My mom taught at Greenwood Elementary most of her teaching career and my mother-in-law taught in Florence as well.  Our family has come full circle because now our own children are students in Florence.  Our three sons are students at Carver Elementary, Sneed Middle School and West Florence High School.

This pandemic, quarantine and e-learning has reminded me just how far Florence has come in educating students and embracing technology.  I pulled out an old article from our scrapbook that was probably written around 1983 in the the Florence Morning News.  It’s a story about the purchase of the very first computer at Greenwood Elementary.  My dad was ahead of his time.  He was passionate about computers and technology.  We were one of the only families I knew with multiple computers and even internet in our house in the 80’s.  He knew that computers were going to be vital to learning.  My dad was chairman of the PTA at Greenwood and he helped lead the school to raise the funds to buy the first computer for student use.  This photo is of me and the principal.  I know…that boy in the photo looks like my son Luke went back in time in a DeLorean to take this picture…lol.  He really is my mini-me.  But… imagine.  Imagine what life would have been like if this pandemic occurred when I was Luke’s age.  No one in the 80’s would have been receiving an education during these days of quarantine in Florence.  If this had happened even just a few years ago it would also be a different story.  Our students became 1:1 with technology just this school year.

I’m grateful for the leadership of our Superintendent, Dr. Richard O’Malley for helping our students be one-to-one with technology.  Because of some great decisions and careful planning, every student and teacher walked into this quarantine with the tools they needed to help them thrive through this last quarter of the school year.

We have a long way to go as a community, but I for one am grateful.  Where there was once one computer in my Florence One elementary school, now every student has one in their hands.  That is a reason to celebrate.  Well done Florence One! 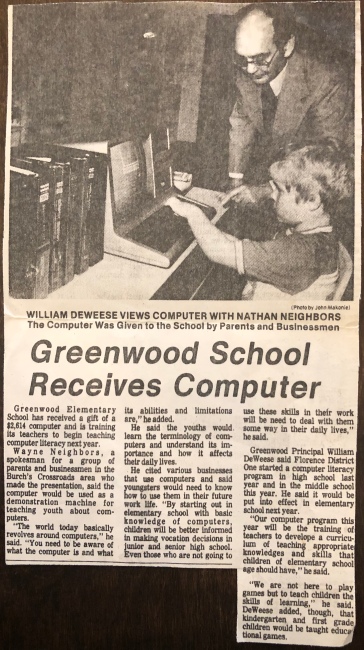