Before I stepped off the plane in Honduras I created a video for the students at Ebenezer to tell them why I was going with our church’s mission team.  I posted that video a week ago.  At the time I knew the general answers as to why I was going.  I knew that all Christ followers have been commissioned by Christ to go into the world and tell the Good News.  I knew that our church was part of a Carolina Partnership with Honduras.  But what I didn’t know then that I know now is more than I could have imagined.

Over the past week I’ve seen the fruit of relationships that have been cultivated over the past eight years.  Let me tell you a few stories to help explain: 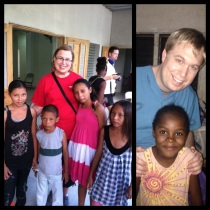 The Quantanilla Children & Nancy  – These children are a picture of what it looks like to have an ongoing relationship with another country.  When our team first met these children they were just little children and babies. The Quantanilla family (pictured with Derinda Connor) were found by our team in 2007 wandering around the clinic at Icoteas.  The team connected them with the local pastor who eventually got them into the  orphanage.  The Connor family has had a special connection with them ever since. The children love them like they are their parents. Another child, Nancy (pictured with Ryan), was found by the team when she was just six months old and near death and is now a beautiful healthy 8 year old. When we drove up to the orphanage the Quantanilla children ran up and clung tightly to Derinda. This is what staying connected to the same mission looks like. 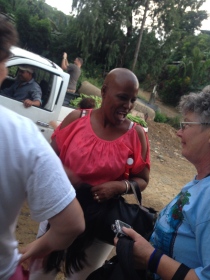 Marlena Lawrence – Marlena is a young woman from La Cieba who serves as a translator for our teams and has been a friend since 2005. Because we’ve had a long term relationship with her we are bringing her home with us this weekend.  Marlene has breast cancer.  The Connors have been working this year to make it possible to get Marlena a Visa and surgery/treatment in Florence, SC.  How awesome is it that one of our sisters in Honduras will have the chance at life because a medical team made a commitment to the people long past the “mission trip.”  She’s coming home with us on Saturday and will hopefully return to Honduras in a few months cured of cancer.  What a way for Ebenezer to celebrate breast cancer awareness month! 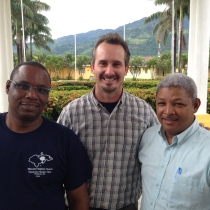 The Pastors (David – left, Shane – center and Mario – right)  – Our drivers and translators this week are not hired men. They are local pastors who serve along side us year after year.  Each of them has been called by God to pastor here in Honduras. Our ongoing relationship over the years has helped make it easier to do ministry. They not only take care of our on-the-ground logistics, they stand in the gap and minister to the people when we’re gone.  I’ve traveled to a variety of countries and this has been one of the safest most well organized trips and these men are part of what makes that possible.  Pray for these men and their congregations. 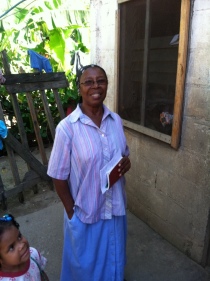 Sister Leonarda – Sister Leonardo runs the Home of Hope orphanage in Limon.  She and two other women are raising 40 children. This elderly woman’s love and dedication is contagious.  When I asked her why she does this she said it’s because of Jesus Christ.  Sister Leonarda said, “If Christ gave His life for me, I should give my life for these children.”  Wow!  This is what sacrifice looks like.  For many years she has helped us bring help and hope to these children.  Soon they will be moving into a new orphanage which will be the largest building in Limon.  Ebenezer and other partnering churches have helped make this orphanage a reality. 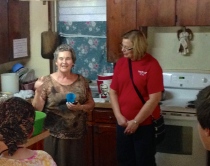 Sister Eleanor – Sister Eleanor is a woman who has helped to start over 200 churches in Honduras over the past 50 years. She is the mother of Shane (one of the pastors mentioned earlier). She runs soup kitchens all over the Le Cieba area and hosts medical teams from America about twice a month. She helps us store all of our equipment and supplies at her missionary compound.  Another fantastic part of the missionary compound that Sister Eleanor runs is a home for girls to get them off the street, keep them from sex trafficking and educate them.  She is also a strong prayer warriors here in Central America.  Our relationship over the years with Sister Eleanor has gotten us in many doors and it’s always a blessing to be with her. 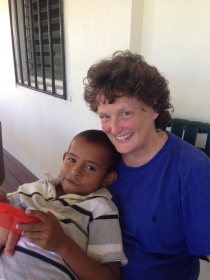 Martha & Mainor – A few years ago one of our team members felt called to begin the adoption process with one of the children from the orphanage.  She first met Mainor in 2009 when he was four years old.  Unfortunately, adoption can be a long and emotional process.  It is harder to adopt from this orphanage because it’s not one of the government orphanages.  Martha came on our trip this week to get another chance to spend time with Mainor.  Seeing him in person is so much better than her monthly phone calls with Mainor.  After nearly three years of work, she hopes he will come home for good in a few months.  We are praying that they are united very soon.

Before I came on this trip I heard some say, “Why Honduras?  Why do they always go to the same place every year?  Aren’t there other people and other places who need to hear the Gospel?”  Yes, the world is big and everyone needs to hear the Gospel, but this seems to be where The Lord has opened the door for Ebenezer to make an impact to the nations.  These children have helped me understand the meaning of James 1:27 which say, “Religion that God our Father accepts as pure and faultless is this: to look after orphans and widows in their distress…”

Come to Honduras.  Sit and play with these 40 orphans on their dirt floor.  As they cling to you for affection and call you their aunt/uncle because they know you’re coming back…then you’ll know.  You’ll know what I now know and you’ll want to come again and see your family in Christ.

3 Comments on “Why Honduras: Answered”